Nissan partnered with Mackie’s of Scotland, an ice cream producer powering its family-owned dairy farm by renewable wind and solar energy. The project demonstrates how a ‘Sky to Scoop’ approach can remove carbon dependence at every stage of the ice cream journey.

Most ice cream vans, particularly older models, have diesel engines which are kept running to operate the refrigeration equipment.

These motors are criticised for producing harmful emissions, including black carbon, when left idling.

Some UK towns and cities are now looking to ban or fine these vehicles. Nissan’s concept presents a potential solution for vendors looking to reduce their carbon footprint, and offer customers a better experience.

The prototype van is based on the e-NV200, Nissan’s 100 per cent electric LCV (light commercial vehicle). The concept is a working demonstration of Nissan’s Electric Ecosystem, combining a zero-emission drivetrain, second-life battery storage and renewable solar energy generation.

“Ice cream is enjoyed the world over, but consumers are increasingly mindful of the environmental impact of how we produce such treats, and the ‘last mile’ of how they reach us,” said Kalyana Sivagnanam, managing director, Nissan Motor (GB) Ltd.

“This project is a perfect demonstration of Nissan’s Intelligent Mobility strategy, applying more than a decade of EV experience and progress in battery technology to create cleaner solutions for power on the go – in ways customers might not expect.

“By eliminating harmful tailpipe emissions, and increasing our use of renewable energy, we can help make this a better world for everyone.”

While the van’s motor is driven by a 40kWh battery, the on-board ice cream equipment, including a soft-serve machine, freezer drawer and drinks fridge, are powered by the newly unveiled Nissan Energy ROAM, which goes on sale later in 2019.

Designed for both professional and leisure applications, ROAM is a portable power pack that uses lithium-ion cells recovered from early first-generation Nissan electric vehicles (produced from 2010 onwards). This provides a sustainable second-life for Nissan EV batteries.

“We’re delighted to have worked with Nissan on this project as it’s the perfect complement to our own vision of becoming self-sustainable in renewable energy – and eliminating carbon in the journey from ‘Sky to Scoop’,” said Karin Hayhow, marketing director at Mackie’s of Scotland.

“At Mackie’s we’ve already shifted our dependence from fossil-fuels on to clean renewable power. We now export 4.5 times more energy to the national grid than we consume.

“This year we will make further progress towards our vision with the installation of an innovative new low-carbon refrigeration system. We’re proud to be a ‘climate positive’ ice cream maker.”

Chris Large, Senior Partner, Global Action Plan, added; "The Clean Air Day campaign is here to celebrate innovation and accelerate action. We welcome Nissan’s efforts to make ice cream vans that serve up toxic fumes a thing of the past. Schoolchildren campaigning for the Clean Van Commitment sent a video message to all van fleets encouraging them to get millions more electric vans on to UK roads in place of diesels. I think those children would love this project.” 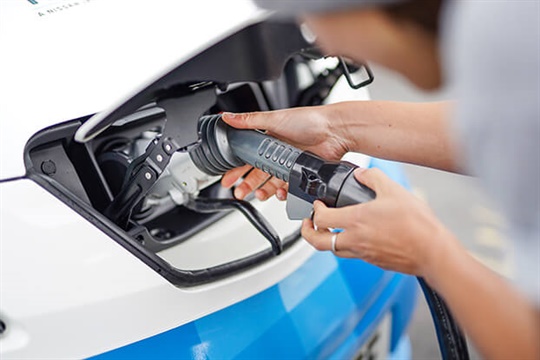 The e-NV200 has an all-electric driving range of up to 124-miles (WLTP Combined)* between charges.

The two Nissan Energy ROAM units have a combined storage capacity of 1.4kWh and can each output power at up to 1kW.

The concept takes a number of new approaches to the ice cream van. Ice cream is served from a hatch that opens in the side of the vehicle, with the vendor dispensing ice cream standing next to the van – a customer-facing experience instead of being separated by an elevated counter.

Payment can be by cash, but also contactless bank card and smartphones via a ‘tap-to-pay’ panel mounted on the side of the van.

Instead of a jingle to attract customers – not always popular with parents – the concept has a smart button that generates a tweet of the van’s precise location using the global addressing service What3Words.

What3Words divides the world into 3m x 3m locations, each with a unique three word address, e.g. ///trendy.angel.define is a spot on Brighton & Hove’s seafront in the UK.

Customers can easily find the van in a park or seafront location where normal street addressing would not apply.

Thanks to the e-NV200’s bi-directional charging capability, owners could even income through the winter – when the van is less frequently used.

Through a V2G (Vehicle-to-Grid) charger, the e-NV200’s battery can be used to store surplus energy from the national grid (for example renewable wind and solar energy), and then provide it back to the grid when needed.

This technology can help balance out the peaks in national energy demands, as well as providing EV owners with additional revenue from their vehicle when it’s not being driven. About Mackie’s of Scotland
Mackie’s is a Scottish ice cream producer aiming to be Britain’s ‘greenest’ company by becoming self-sufficient in energy and removing any dependence on fossil-fuels.

Mackie’s is the no.1 ice cream in Scotland (Kantarworldpanel 2019) and is available in all major UK supermarkets and exported to several countries around the world.

‘Traditional’ is Mackie’s most popular flavour and is a natural creamy ice cream – with no added vanilla.

Mackie’s supplied some of their Traditional mix for the soft-serve machine and Mackie’s dairy ice creams for scooping from the freezer drawer.

About Nissan e-NV200 and Nissan Energy ROAM
The Nissan e-NV200 is a cost-effective and capable all-electric van, with a 40kWh battery capacity. Deliveries can be done easily and UK government incentives to drive electric include the plug-in car grant, zero congestion charge and zero road tax.

Compact on the outside and spacious on the inside, the Nissan e-NV200 is designed for city business, with 4.2m³ load space for cargo; a driving range of up to 187 miles in city conditions (WLTP Urban City Cycle), and rapid charging from 20-80% in just 40-60*** minutes.

With a storage capacity of 700Wh and maximum power output of 1kW, the Nissan Energy ROAM is a portable power pack offering a clean, sustainable solution for electricity on the go.

Comprising second-life batteries recovered from first-generation Nissan LEAF electric vehicles which have come to the end of their life, Nissan Energy ROAM is the latest example of Nissan’s leadership in sustainable energy technology.

Nissan Energy ROAM launches in Europe in 2019. Local market pricing will be announced in due course.

*Figures shown are for comparative purposes; only compare figures with vehicles tested to the same technical procedures. The electric range shown achieved using the new (WLTP) test procedure. Figures obtained after the battery was fully charged. Actual real world driving results may vary depending on factors such as the starting charge of the battery, accessories fitted after registration, weather conditions, driving styles and vehicle load.
**STC: Standard Test Conditions are defined as the solar irradiation of one kilowatt (kW) per square metre, a module temperature of 25 degrees Celsius and a solar irradiation angle of 45 degrees. Using a solar panel accessory, the charge time will depend on the solution used as well as the solar irradiation.
***Figures quoted are for a 40kWh battery. Time dependent on charging conditions, including charger type and condition, battery temperature as well as ambient temperature at point of use. Indicated home (or office) charging requires use of a 32 A / 6.6 kWh (7kW) wall box. Indicated rapid charging time requires use of a CHAdeMO rapid charger.