Nissan's incredible 50 years of motorsport success in the USA will be celebrated this week with Nissan taking centre stage as the featured marque of this year's Rolex Monterey Motorsports Reunion. 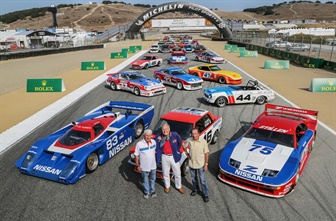 With more than 200 IMSA sportscar victories and 100-plus SCCA National Championships, many of the stars and the cars of Nissan's past racing success will be in Monterey.

Famous Nissan and Datsun racers will be on track, while championship-winning legends – including John Morton and Peter Brock – will attend this year’s event.

Morton, Brock and other past champions will also be special guests on Adam Carolla's "Car Cast" podcast, which will be recorded at the Nissan display in the heart of the WeatherTech Raceway Laguna Seca paddock on Saturday.

Comedian and actor Carolla is also racing in Monterey. The LA-based comic owns the largest collection of Nissan and Datsun cars formerly raced by acting and racing legend Paul Newman.

Along with celebrating the past, Nissan also will look to the future with Nissan's season five ABB FIA Formula E car on display along with the recently revealed Nissan GT-R50 by Italdesign.

The GT-R50 made its debut at the Goodwood Festival of Speedin the UK and recently turned laps ahead of the 24 Hours of Spa.